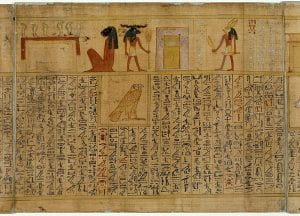 Making papyrus is easy work but when those pharaohs want heaps of papyrus a day for those silly scribes to write down their thoughts it gets challenging.  First, you have to cut the papyrus plant. Next, you remove the outer coating and use the inside. Then you have to cut the inside into strips, the strips are then laid crisscrossed in different layers (right to left and up to down) on top of a big stone.  After you do this layer after layer you stop when you reach your desired thickness or whoever you are making it for their desired thickness. I then place a cloth on top of the strips and then I pound the cloth with a wooden mallet until the layers are compressed into a sheet of papyrus.  Often people will glue several sheets together with flour paste to form a scroll.

When I was a little girl I would sit and watch my father and grandfather make papyrus back then that was all I knew and wanted to do when I grew up.  Now making papyrus is getting a little bit old. I am so glad I don’t make the ink for the papyrus or else I wouldn’t go to sleep at night. Those silly scribes don’t know how much work it is to make the papyrus and when they mess up they waste ink and waste the papyrus that takes all day to make.  I wish I made more money doing this but pharaoh doesn’t pay me a lot. I get just enough money for dinner that night and part of breakfast in the morning. Luckily my husband is a farmer but only for fruits and veggies we can only eat so many of them so we buy things like oatmeal and bread. My husband loves the shaduf he thinks it is the best invention in the world after years of hard work someone invented it and made his life easier and now we have more to eat and trade.  After all, I should feel lucky because I am one of the only papyrus makers in the kingdom. Don’t tell pharaoh about this letter or he will fire me or worse be publicly beaten. I have to go. I don’t want to waste too much papyrus and be a hypocrite.